on April 28 | in PROJETOS E AÇÕES, PROJETOS REALIZADOS | by Renctas | with No Comments

About 100 people, including parliamentarians, heads of government agencies and non-governmental organizations, and representatives of foreign governments, participated in last May 02 public hearing convened by the Environmental Commission of the Federal Chamber – CMADS and the Parliamentary Front environmentalist for submission of diagnosis on the Illegal Trade in Wild Fauna Atlantic Forest. The document – containing 202 pages – is the result of two years of research conducted by RENCTAS and was sponsored by the Critical Ecosystem Partnership Fund – CEPF and support the Alliance for the Conservation of Atlantic Forest, maintained by Conservation International in Brazil and Foundation SOS Mata Atlântica. The presentation of the results of the diagnosis was performed by the Project Coordinator of RENCTAS, Angela White, who was also responsible for conducting the study.

The Coordinator of the Parliamentary Group and Councillor Environmentalist RENCTAS, Mr Sarney Filho said that Congress needs to streamline the implementation of the recommendations made by the two Parliamentary Committees Investigation – PICs that have investigated the trafficking of wild animals. “Parliament has demonstrated its concern about this issue and now need to put in a vote the draft laws that were presented during the performance of PICs,” said the former minister of the environment. The president of CMDS, Nilson Mr Pinto said during the opening of the public hearing, the Commission is available RENCTAS to contribute in whatever is necessary in order to amplify the results of the project. The officially RENCTAS forward to IBAMA and other agencies that participated in making the diagnosis a request for them to give continuity to the process through the database made available to them through the website: www.diagnostico.org.br

CEPF and Alliance for the Conservation of Atlantic Forest 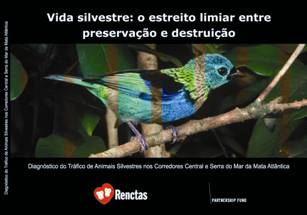