Suspect said to boast he killed over 1,000 jaguars

on August 8 | in Destaques, Renctas na Mídia | by Renctas | with No Comments 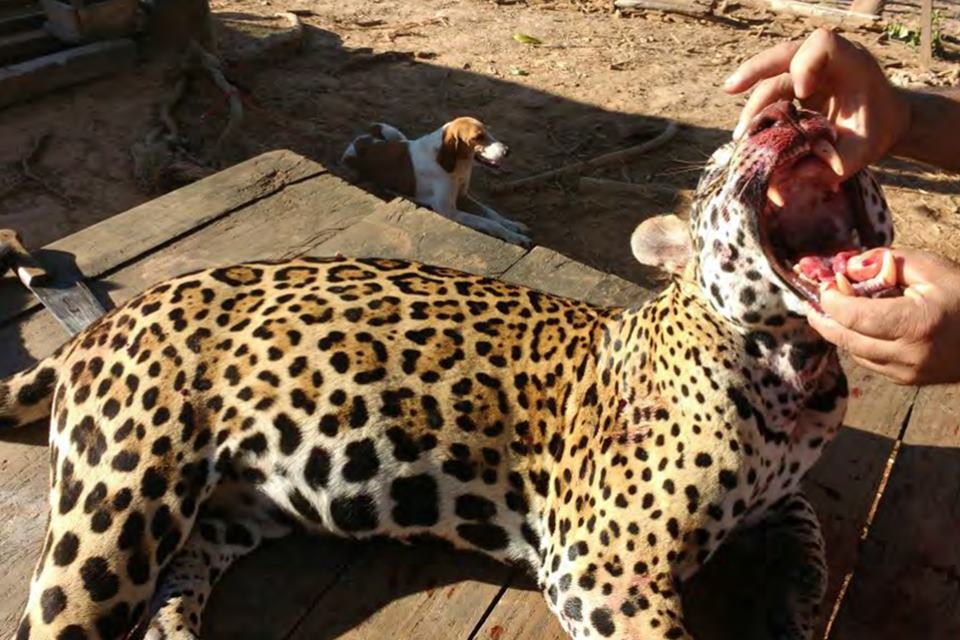 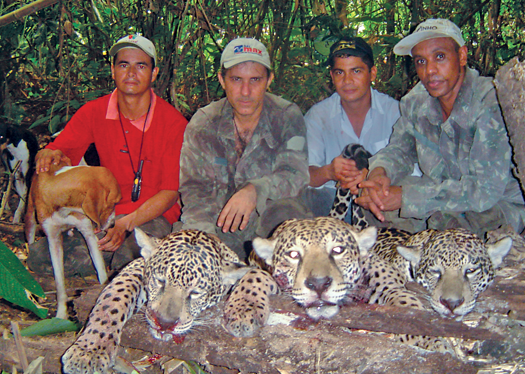 Temístocles Barbosa Freire (second from left) and other alleged members of a poaching ring pose with dead jaguars in photo federal police copied from a confiscated cell phone.

A federal court in Brazil’s western-Amazon state of Acre opened a criminal case against seven suspected poachers this month after prosecutors accused the men of illegally killing animals that included jaguars. The jaguar (Panthera onca), Latin America’s largest feline and the world’s third-largest cat after lions and tigers, is “near-threatened,” with its population declining and its habitat shrinking, according to the International Union for Conservation of Nature. One of the suspected poaching ring’s seven members, dentist Temístocles Barbosa Freire, allegedly boasted to a new patient that he had killed over 1,000 jaguars since 1987. The patient tipped off federal police, prosecutors say, and an undercover federal policeman subsequently made an appointment with Barbosa Freire, posing as a new patient. During the undercover officer’s first clinical visit, in June of 2016, the dentist repeated the claim that since the mid 1980s, he had killed over 1,000 jaguars, according to federal prosecutors handling the case. After gathering subsequent testimony from witnesses who knew of the poachers’ activities, Acre federal police conducted courtapproved wiretapping of the poachers’ phones during the second half of 2016, Victor Negraes, a federal police officer involved in the investigation, told EcoAméricas. “In wiretapped phone conversations, ring members claimed to hunt jaguars for sport and as a favor to ranchers whose cattle the jaguars killed,” Negraes says. “In those wiretaps they also shared three different strategies for killing [jaguars]: using hunting dogs to pick up their scent; using a cuíca [a Brazilian friction drum] whose high-pitched sound replicates the calls of a jaguar; and putting out dead-meat bait and waiting in ambush for them.” Search yields texts In late December of 2016, federal police with search warrants entered ring members’ homes and seized their mobile phones, discovering text messages about the members’ hunting trips. In the text messages and wiretapped calls, ring members said they had killed eight jaguars; 13 capybaras (the world’s largest rodent); 10 white-lipped peccaries; and two bush deer on 11 hunting trips in the second half of 2016. Federal police also seized jaguar pelts, which were being used as rugs, and photos of ring members posing with dead jaguars, one of them a 1987 shot of Barbosa Freire. They confiscated one ring member’s diary, which allegedly revealed he had killed jaguars since 2005. The police also seized several dozen firearms, 23 hunting dogs (which were subsequently sent to animal shelters), as well as pickup trucks that had been used to transport dogs to hunting areas, Negraes says. Because these seizures made it unlikely the suspects would continue poaching, the men were released to await trial after they had made oral depositions at police headquarters, authorities say. In March of this year, Joel Bogo a federal prosecutor in the state of Acre, used evidence from the probe to file a criminal lawsuit against the ring. “The dentist’s claims of having killed over 1,000 jaguars could be true because although this is a shocking number, he had been hunting them since at least 1987, another ring member had been doing so since 2005, and evidence gathered by federal police showed the ring had killed at least eight jaguars in the last half of 2016,” Bogo told EcoAméricas. Fines the norm All suspects will likely stand trial by year’s end for illegal hunting of wildlife, forming a criminal ring and using firearms without a permit, Bogo added. Federal prosecutors asked that each ring member receive a six-month minimum sentence for each of the 33 animals killed in the last half of 2016. If convicted, each could also serve an additional one to three years for forming a criminal ring and two to four years for illegal use of a firearm. If the judge were to order successive terms for these crimes, each suspect would face up to 10 years in prison. But suspected wildlife poachers, like wildlife traffickers, are typically punished with fines rather than prison terms in Brazil—this despite the considerable ecological damage they do by killing animals such as jaguars. Says Yara de Melo Barros, executive coordinator of the Jaguars of Iguaçu Project, a conservation project at Brazil’s Iguaçu National Park: “Killing jaguars greatly impacts wildlife equilibrium because these predators at the top of the food chain help control the size of animal populations—from rodents and deer to alligators—further down the food chain.” De Melo Barros adds that some 50% of the jaguar’s habitat in Latin America is located in Brazil, where up to 15,000 of the cats still live, mainly in the Amazon and, to a lesser extent, the Pantanal floodplain in western Brazil. That habitat is shrinking due to the expansion into the Amazon of mining and agriculture, she notes. “Hunting and habitat destruction are both causing the jaguar’s population size to diminish in Brazil,” she says. 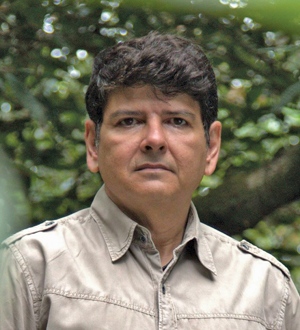 Illegal trafficking in wildlife ranks as the world’s third largest illicit activity, trailing only drug and weapons dealing, according to the UN. For two decades, Brazilian Dener Giovanini has tried to attack the problem as head of a non-governmental organization he founded in his native state of Rio de Janeiro in 1999. The group soon went national, becoming the Brasília–based National Network to Combat the Traffic of Wild Animals (Renctas). It collects and disseminates data, organizes volunteers and helps train law enforcement field agents in how best to curb wildlife trafficking. Renctas is a recognized pioneer in the fight against animal trafficking in Brazil, winning awards from the UN and the Brazilian Congress. Its success has drawn death threats for Giovanini, causing him to assume a lower public profile nowadays. His next goal is to organize an international network against wildlife trafficking, starting with a conference of Amazon country non-governmental groups in Brazil in December. EcoAméricas correspondent Michael Kepp interviewed Giovanini recently on Skype.

What does news of the jaguar-poaching ring in Brazil say about the state of animal conservation in the country? (See story—this issue)

If this poaching ring was able to operate for over 30 years without enforcement authorities being aware of its activities, it leads me to believe that hundreds of other similar criminal rings are likely hunting jaguar in Brazil, some of which don’t just poach the [animals], but illegally export their pelts, teeth, and claws. In China and Vietnam, jaguar teeth and claws fetch high prices and are ground up and sold as traditional medicines and aphrodisiacs.

What forms of wildlife trafficking are taking the greatest environmental toll?

Smuggling of live animals in Brazil or abroad, a crime that mostly involves songbirds or birds with colorful plumage, like parrots, is the most prevalent type and, as such, creates the greatest environmental impact by diminishing biodiversity and increasing the number of endangered species.

What is the market for such wildlife?

The UN estimates the illegal trade in wildlife to be worth about [US]$20 billion a year. Brazil is responsible for about 10% of this market. We’re talking about [US]$2 billion a year just in Brazil. About 60% of the $2 billion per year fetched for Brazilian wildlife is smuggled abroad live and sold to collectors. A Lear’s macaw [Anodorhynchus leari], a magnificent blue bird threatened with extinction, can fetch $60,000 abroad. About 40% of that wildlife consists of body parts, mainly feline pelts, teeth, claws, bones or colorful bird feathers, shipped abroad.

How are they smuggled abroad?

Smuggling wild animals by airplane is the quickest and safest way to get them to a foreign destination. Birds and snakes are most commonly drugged with tranquilizers, put in PVC tubes with air holes, and these PVC tubes are put in carry-on luggage. This allows smugglers to open the luggage from time to time to let more air in. And even though many such animals die aboard, enough survive to make such smuggling profitable. Bird eggs are taped to the inside of underwear or carried in coat pockets of airplane passengers because they need body and clothing warmth to incubate. Live insects, spiders, and scorpions are also usually carried in PVC tubes with air holes, with the PVC tubes then put inside carry-on luggage. There have been cases in which venomous snakes, spiders and scorpions have escaped from carry-on luggage on planes leaving Brazil. Dead insects are usually sent abroad through the mail. This month during a routine inspection at São Paulo’s international airport, Ibama [the enforcement arm of the Environment Ministry] seized 482 dead insects captured in Brazil. The biopirate had declared them as artisanry. They were individually packaged in small plastic envelopes inside cardboard boxes to be illegally air-freighted to Chilean researchers. The sender was fined R$20,000 (US$5,320), a very small amount.

How do you assess the impact of the government of new Brazilian President Jair Bolsonaro on wild-animal protection versus that of previous regimes?

I am far more concerned about the Bolsonaro government’s impact on poaching and wildlife trafficking and protection than I was with previous governments because Bolsonaro himself has declared that he favors legalizing hunting. Many in Congress, where four bills have been proposed to make hunting legal, share that sentiment. Any of these could pass because federal legislators are, by and large, not concerned about the environment. Bolsonaro also issued a presidential decree in June that greatly facilitated firearms sales, but Congress annulled the decree and decided to propose a new law to facilitate arms sales by cutting red tape. If passed, this proposed law could put more rifles into the hands of more hunters or potential hunters, thus encouraging more poaching and wildlife trafficking.

What’s next for Renctas?

We are organizing the First International Coalition Against Wildlife Trafficking, with the first congress to take place in [the western Brazilian Amazon city] of Manaus in December. We are inviting representatives of NGOs from all nine Amazon-region countries—Brazil, Peru, Ecuador, Bolivia, Colombia, Venezuela, Suriname, Guyana and French Guiana—whose main focus is advocating against wildlife trafficking. The aim of the congress is to organize a joint effort to form a database and exchange information about this illegal practice. This was something that Renctas had put on its radar in the past, but is finally setting aside enough time to organize properly. We lacked the outside funds until recently, when we got funding from the Oak Foundation in Geneva. Also, Renctas and Globo Filmes, the film-production arm of TV Globo [Brazil’s largest television network] will by year’s end release a film in cinemas in big Brazilian cities about online animal trafficking within Brazil, an increasingly serious problem. Members of WhatsApp groups here offer live animals to other Brazilians via WhatsApp. The buyers deposit the money in the sellers’ bank accounts, who then send the animals by mail or private transport.